The Hewlett Packard 46 is a derivative of HP's very popular and successful 2nd generation handheld machine, the HP 45. The 45 and 46 were follow-on machines for the revolutionary (at the time) and later historic HP 35. The 46 uses essentially the same design as the handheld 45, but with modifications to put it in a desktop form-factor, and add an impact printer for recording calculations. The seven-segment LED display that this example has is optional (OPTION 001). All base-configuration HP 46's came with no digital display, only the printer. The only indicator on a base 46 is a LED that lights to indicate when the machine is busy calculating. The 46 was introduced in 1973, and this particular machine was built fairly early in the production run of the machine, with a serial number of 1314A05624, which decodes out to the 14th week of 1973, the 5624'th machine built during that 'week' (HP's manufacturing 'week' in many cases didn't get updated on the serial number tags, meaning that a given 'week' may have actually had many real weeks worth of production included in it.) 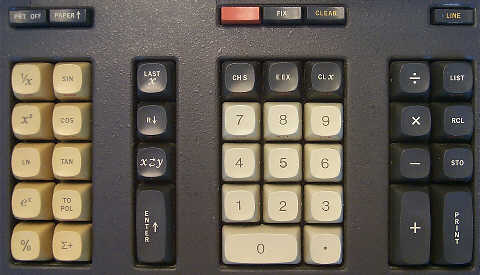 The 46 is quite a capable machine, combining a good mix of math, statistics, and data conversion functions into a relatively small (for the time) desktop package. Included in the functions are, of course, the basic four math functions, along with 1/x, x2, natural and base 10 Logarithms, ex and 10x, yx, percent and delta percent. Trig functions include sine, cosine and tangent (with arguments in degrees, radians or grads) and their inverse functions. Statistics functions provided are summation, mean, standard deviation, and factorial functions. Data conversion functions include degrees/minutes/seconds<->decimal conversion, and english/metric constants. Also provided are some convenient functions that print the content of the stack on the printer, as well as a function that prints the contents of the ten memory registers (0-9). A 2-key sequence loads the constant Pi. 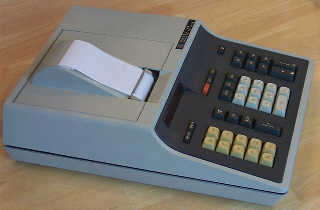 A Profile view of the HP-46

The 46 provides a full 10 digits of capacity, with extra guard digits (2) to provide higher accuracy. In scientific notation, the exponent can range from -99 through +99. 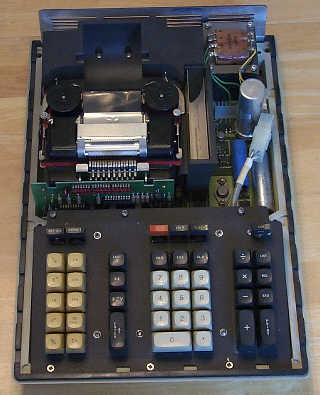 The CPU of the 46 is made up of the same Large Scale IC's as used in the 45, but the ROMs that contain the firmware have different part numbers than those used in the HP-45. The difference is likely attributable to the fact that the HP-46 ROMs contain additional code to drive the printer and add the additional functions that can only exist on a calculator equipped with a printer (such as [print stack], [print memory registers], [paper feed], etc.). Sadly, the undocumented timer function of the HP-45 appears not to have made it into the firmware for the HP-46, my guess is that the ROM space that this undocumented function consumed was surplus on the HP-45, but was needed for the printer functionality that the HP-46 has.

The Option 001 Display in Operation

The optional LED display module is a small daughter-board that plugs into the main calculator board. The option board consists of the LED displays themselves, along with the necessary driver IC's. The displays used are the same displays used in the HP-45. The displays are in dual-inline packages, with five digits per package, and built-in magnifying 'bubbles' over each display element. Immediately to the left of the display modules is a single discrete red LED. This LED lights up to indicate when the machine is busy. On HP-46's that were not ordered with "OPTION 001" (the display), a similar circuit board, including only the red "BUSY" LED was installed in the option slot.

In cases where an error occurs (e.g.: division by zero), the 46 prints "NOTE" on the printer, and sends an unusual "0 0 0 0 0" message to the display. There are four different error notes that the printer will print out when error conditions occur. NOTE 1 indicates division by zero, or a Standard Deviation calculation with less than 2 entries. NOTE 2 indicates logarithm of a non- positive number, or a negative number to any power. NOTE 3 indicates invalid argument to a trig function or too large an argument to the Degrees/Minutes/Seconds conversion. NOTE 4 indicates square root of a negative number, factorial of a fractional or negative number, or attempt to delete non-entered data, or overflow in entered data (in statistics functions).

The HP 46 is built like a tank, in true HP form. The machine weighs in at a stout 13 pounds, due in part to a solid metal skeleton inside the case, the relatively heavy printer subassembly, and lastly because of an over-engineered cabinet made of a very dense structural foam. It is clear that HP wanted this machine to be durable, because it came with a plastic carrying 'suitcase' that the machine and accessories could be placed into for easy transport. The plastic case doesn't have any padding inside, it simply has molded recesses that securely cradle the machine when it is inside the case. Because of this lack of padding inside the case, it appears that the 46 was designed to withstand fairly severe shock with no damage. The outside of the carrying case proudly proclaims (in large lettering) "HEWLETT PACKARD calculator", which seems like it would make the machine an easily identifiable target for theives. 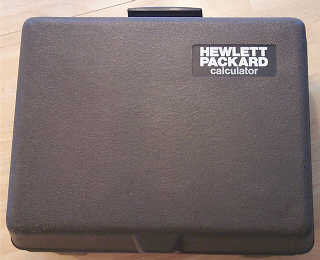 The HP-46 is not terribly fast, in fact, it is significantly slower than its predecessors, the HP 9810A and the earlier HP 9100B. Part of the slowness of the machine is due to the fact that the optional LED display has to 'wait' for the built-in printer to print the result. The printer and keyboard are buffered, which means that the user can actually type ahead of the machine, and, within limits, no keypresses will be lost...the machine will just keep churning away until it catches up with the user. The printer can be turned off via a keyboard panel switch, which speeds the machine up significantly, but it still is not as fast as the earlier machines. The all-nines (10 of 'em) divided by 1 benchmark takes approximately 1/3-second, with 69! (factorial) taking about 1.1 seconds to perform. Raising a number to an arbitrary power takes just over one second. Trig operations average around a second to perform, but some trig operations can take nearly two seconds to generate a result.